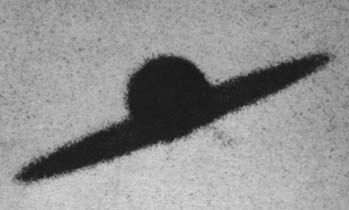 On March 17th 1975 Pat McCarthy of Hamilton Ontario took a series of photos which appear to show a large sombrero shaped craft in-flight. The object was described as metallic and larger than a 747 aircraft in size. As we have not examined the photos first hand we will not offer an opinion as to their authenticity, however what follows is Mr. McCarthy's report and the opinions of those who did analyze the photos during the time period in which they were taken.

On the morning of March 17th Pat McCarthy set out from his home in Hamilton with the purpose of photographing hawks in the nearby Waterdown area. At approximately 1:30pm he decided to pack it in when he noticed something moving out of the corner of his eye. At first he thought it was a frisbee, or a bird, until he realised it was moving far too fast. He attempted to photograph the object, but had great difficulty keeping it in the viewfinder due to it's speed. He was able to get four shots, but it wasn't until development of the film that he learned that he did indeed capture this strange looking object in three separate shots. He continued to watch the object as it straightened out and moved away at a great rate of speed. McCarthy reported that the object diminished in size at a constant rate until it completely disappeared from view.

The sighting lasted approx. 30 seconds and during that time the object was reported to have displayed amazing aerodynamic manoeuvres. McCarthy reported that at one point it executed a complete figure eight.

When Mr McCarthy reached home he called the Hamilton Spectator (a local newspaper) who advised him to bring his camera in so that they could develop the film in their processing lab. The photos baffled those at the newspaper. They were also examined by physicists at McMaster University whom estimated the craft to be over two miles away from the camera and over 200 feet wide. An astronomer at the Hamilton Astronomical Society stated:

"It has the classical accepted appearance of a saucer or what the books tell us flying saucers look like. But...it beats me....it sure looks pretty authentic. It's one of the best pictures of it's kind I've ever seen."

Further to corroborate McCarthy's report was another report made by a Burlington woman by the name of Daisy Wilmot of a similar but smaller craft hovering over Lake Ontario.

There was no official government response to this report or the photos, however Dr Frank Maine (L-Wellington South) to great interest as reported by the Guelph Daily Mercury. He is quoted as saying, "I've been waiting for irrefutable evidence and this could just be what I've been waiting for."