Please note: the image below was picked by the witness from the internet as similar to what she saw, but is not a photo of the object in question. It is added here only in order to to give readers an idea of what it appeared like to the witness with their eyes. 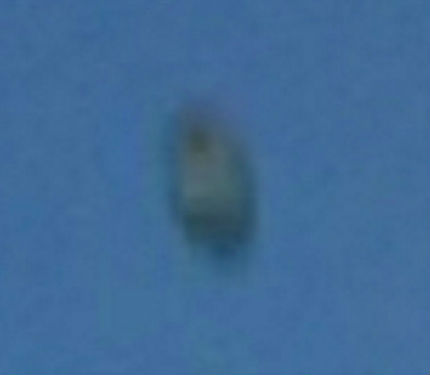 "Aug 13th [2015] just after midnight and friend and I had just returned from sky watching the meteor shower at muskoka sands beach. We were sitting outside on the patio of his condo when he pointed out another shooting star and then pointed out to me an object in the sky. I turned and watched what I thought was a dark grey balloon. It didn't seem to be high in the sky but it changed shape and moved like a bird..at the same time not like a bird. It appeared to be floating. We were confused as it could have been what we thought was a bird. There were no lights no sound but it if it was a bird it was not flapping. At this time of night there was no wind, no birds in the sky. We hurried around the building trying to keep this object in sight. We followed the object over the building. It appeared to move (glide) in different directions it dipped turned changed speeds. We tried to explain this off as a bird. We lost sight for a moment and it re-appeared. Looking for an explanation and watching it closely we could not see "wings". It didn't appear to be flying like a bird. It was almost a shade of the night sky. Like dark grey. Still no wings or shape could be determined.Then it just disappeared. We sat for awhile reasoning what we saw and decided to Google recent reports to try and find a reason for what we saw and found this report. It was such a similar experience we had to share this story. I have lived here most of my life and have never seen anything like this. It did not move like a bird in the simplest sense. When I recall what I saw I still have no explanation. We saw many satellites, many planes, and many meteors this night all could be explained. But nothing like a floating low altitude "bird" that was gliding with no wind and no sign of wings.

I thought it was a Chinese lantern at first with no light. That's what i exclaimed, but when i really looked I can say that it first appeared as a long object almost cylindrical but tapered in towards the bottom. It reminded me of a grey cocoon. Have you ever heard of this? When I think UFO I don't think of this. It moved so gracefully like a bird but not erratic. I wish I could describe it better.  It was grey but it did not absorb light however It did have a slight "hue" around it like an aura. Its like while it was moving the outter perimeter of the object was slightly distorted. Its what grabbed our attention. That is why it was not a bird. But reason tells me that could be the explanation. It had to be. It simply didn't move like one while we followed it. It went from a long tapered shape to the tapper move up and to the left and came back over the building where it dipped and weaved (no wing movement) to quickly moving south and out of view. No sound. It was literally dead silent. No birds no wind at all. Silence.

I will not forget the experience. I am a believer now. "