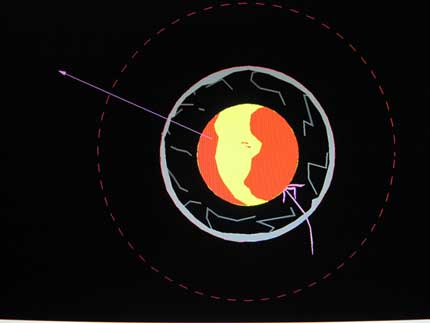 UFO details report: This sighting took place Fri. Sept. 13 2013 at 8:10 PM. I first noticed the lights low in the S-W ,I thought they were low flying aircraft but I then realized no airplane was that colour or that bright.I then realized that they were coming towards me.The second craft was in the leaders seven o'clock at approx 1/4 mile. The colour of the objects was very bright red changing to light orange and then back. On two occasions as they approached there was sparking low in the port quarter which was raspberry red. there was material ejected from this spot which dissipated quite rapidly as it fell.

As the craft rose higher (45 deg.+-) I could begin to see details inside the bright glare. It appeared to be made up of three concentric spheres the outer was not a tangible item but a location where the red light was intensified many fold.The next appeared to be a transparent sphere surrounding a plasma.I believe that this was not a sphere but a torus. The next sphere seemed to be gaseous in substance with the surface like an orange peel.

This surface was bright red but not as bright as the outer sphere.As it rose higher the leading surface of the red sphere split vertically and a bright yellow gas? oozed out and spread rapidly aft.There were two little islands of the red material floating on the yellow. as the craft rose higher a small opening appeared in the yellow gas which showed another sphere with the surface divided up like a waffle iron.there appeared to be a muddy coloured gas roiling around in the squares of the waffled surface.By this time the craft was almost directly overhead, and by the time I was able to turn and re acquire the craft I was no longer able to see inside the bright glare.

Re the sketch pictured above the witness writes: "The colours are not true. The red and the yellow should be the same as a French's mustard squeeze bottle. Red as in the flag and yellow as in the bottle colour. The dotted red line is the approximate place where the light was intensified many fold."

Our thanks goes out to the witness for sharing this experience with us and sketch of the object. If you have seen something similar at this date/time/location, can add further information to this report, or have experienced something that you believe may be a UFO in the province of Ontario, Canada please contact us at This email address is being protected from spambots. You need JavaScript enabled to view it. or fill out our reporting form here: http://psican.org/alpha/uforeporting.htm Your privacy will be protected and confidentiality is assured.