"I saw three UFOs (unidentified) hovering last night, and I wanted to report it to you for your database and website.


On Thursday, July 10, 2014 at approximately 930pm EST I was out for a walk with a friend in a nearby town called Stayner in Ontario, Canada. We were walking along Warrington Rd and were heading in the direction of Collingwood, Ontario (we were headed in a NorthWest direction). It was still daylight. It was not yet twilight, however twilight occurred about 5 minutes after our observation ended. It was not raining that day. The sky was clear, with just a few clouds here and there. The ceiling was average, not particularly low, about average for this area. The sun was going down. Ahead of me I could see the orange light from the sun going down. We were admiring the sun setting as we were walking when all of sudden I looked above the orange portion of the sky and looked into the blue portion of the sky and saw three objects hovering just inches below one of the clouds -- or at least it appeared to be just inches from my observation point.


My friend who was with me also saw them. At first we thought they were just three planes travelling upwards into the sky (objects were on an angle tilting upwards). But then we realized that they were not moving. We stopped walking and stood there on the sidewalk to further observe while being still. The objects were definitely not moving. We observed them for approximately 5 minutes. This time is estimated, did not have a watch or cell phone on us to note the time. Objects made no sound. Objects were about 1 km ahead of us. Distance from ground to object I have no idea, all I can say is that it was up in the clouds, at airplane altitude.


If I were to hold one of the objects with my arm outstretched, I would approximate that each of the objects were the length of half a sewing needle. Their width were about double the width of a sewing needle. So in reality they would have been quite large. They appeared to be solid. They had a bright light which was white, not orange like the light from the sun setting, definitely was white. It was difficult to tell whether the objects were emitting this light or if it was just reflection from the sun. The light was just slightly dimmer than a car headlight. All three objects were the same size. All three objects were in front of the other, and all at an angle.


If I were to take a guess as to a non-paranormal cause than the only thing I can possibly think of is that it could have been three oddly shaped thin clouds that were reflecting light. Their outline was shaped similar to the Kenneth Arnold flying saucers.


The other strange thing about them was how they disappeared from our view. They appeared to just "disappear" or fade out. It almost looked like some kind of mist covered them as all three faded out one at a time. We continued walking up the road another 10 minutes and they never returned. This is a long road which takes about 45 minutes to walk.


The objects did not move at all during our observation. They did not change shape. They did not grow in size, nor did they diminish in size. They appeared solid and had an outline of greyish. The light/reflection emitted did not pulse or flash, it was steady. There was no trail or emissions coming from it.


I attached a sketch of what I saw. Sorry about how light the sketch is. The pencil crayons I purchased are horrible, too light, had to press very hard just to get it to show up. 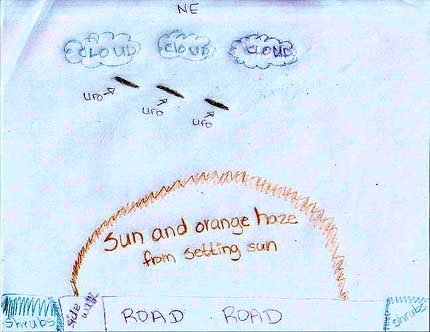 Our thanks goes out to the witness for sharing this experience with us. If you have seen something similar at this date/time/location, can add further information to this report, or have experienced something that you believe may be a UFO in the province of Ontario, Canada please contact us at This email address is being protected from spambots. You need JavaScript enabled to view it. or fill out our reporting form Your privacy will be protected and confidentiality is assured.