“The Witch of Plum Hollow”

Mrs. Barnes was not really a witch in either a religious, nor fairy tale sense. Nor did she actually live in “Plum Hollow.” However, Elizabeth Barnes became known throughout Ontario thusly and her reported “gifts” as a psychic have earned her a place in Ontario’s paranormal history..

Elizabeth was born in the year 1800 - County Cork Ireland. It is rumoured she was the seventh daughter of a seventh daughter (which has not been verified) and this was used to explain her most interesting “psychic” talents.

At a young age she eloped with an Irish sergeant, whom her family greatly disapproved of. The young couple emigrated to Canada, and settled in the Cobourg area. However, a few short years later Harrison (Elizabeth’s husband) passed away leaving Elizabeth a widow.

Still a very young woman at this time she remarried. Her second husband was a shoemaker by trade and together they were blessed with nine children. In 1843 the family moved to Sheldon’s Corners (near Plum Hollow). Apparently Mr. Barnes went on to live in Smith’s Falls leaving his family behind, and Elizabeth alone to support their children. It was at this time that she decided to use her fortune-telling abilities to earn some extra money.

Elizabeth achieved quite a bit of notoriety as a fortune-teller and is credited with helping solve the murder of Morgan Doxtater (his cousin Edgar Harter was tried, convicted and executed for the crime) in 1860. As word of her uncanny abilities spread, people throughout Canada and the US sought out Elizabeth, but it is reported she never charged more than 25 cents for her services.

She is also noted to have advised George Dagg who lived near Shawville Quebec and was seemingly plagued by poltergeists. She “felt” the errie occurrences were actually perpetrated by three individuals dabbling in the occult.

Elizabeth was known throughout her life as a kind woman who was respected as a “wise woman” within her community. Mother Barnes - The witch of Plum Hollow - Elizabeth lived to be over ninety years of age and is buried in an unmarked grave in Sheldon’s Corners cemetery.

Update and companion to above article:

Early in 2006 we were contacted by a direct descendant of Mother Barnes. Elizabeth's gr. great grandson not only openly shared family lore with us, but photographs of the extended family and pages from the family's bible. It appears that Elizabeth's extraordinary gifts may also have been passed down through the generations to some of her descendants. We cannot describe how exciting it has been to be in contact with her family over the past few months and we are eternally grateful! 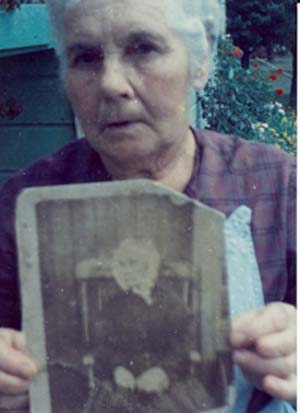 Great Granddaughter Gertrude circa 1960’s with photo of Elizabeth Barnes. 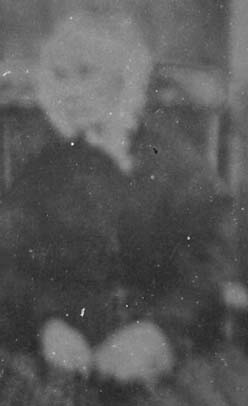 
Please note: The photos above are used here with the express written permission of the family. Copyright is maintained by them and you must seek their permission before use in any format. To do otherwise would be an infringement of international copyright laws.