Michelle contacted us a few months ago in regards to a ‘haunting’ that she is experiencing within her home, which is located in Deseronto Ontario. The century plus home has had several instances of possible paranormal activity that has been experienced by not only Michelle (the current owner), but by her previous tenants and past owners according to neighbours who are related to the original builder. Reported experiences include the sighting of a female apparition by more than one witness. It is of interest to note that a child’s vivid description of the presumed ‘ghost’ has matched that of a previous owner by the name of Margaret. Other occurrences include cold spots, including the apparent freezing of an indoor house plant during the middle of the summer, movement of objects, disturbing dreams, etc. Michelle has given some serious consideration to selling her home due to these “disturbing” happenings.

The following is taken from a preliminary overnight investigation of the dwelling conducted by former P.R.O director K. Leigh and consultant Dee Freedman from the Hauntings Research Group.

After arriving in the town of Deseronto around 8:30 Monday evening, myself following Dee, pulled into the driveway of Michelle's home. This home being built over 112 years ago, still had it's rustic exterior charm.

We entered through a mudroom that leads to a large modern kitchen. We had a quick tour of the home, noticing the extra large rooms and how they were tastefully decorated to reflect country charm.

I did not have any feelings of fright upon entering the house, but actually was feeling a sense of comfort.

Dee needed to use the washroom first, and after a long drive and a stop for coffee; I knew I wouldn't be far behind her. When my turn came, I climbed the twenty some-odd steps to the washroom upstairs. After reaching the top I noticed there was a washroom to my right as well as a master bedroom. To my left was a hallway with a hanging plant in the corner. My curiosity of what the hall turned into was taking over my sense to turn right. I walked down the hallway to the left and found it turned left again with two bedrooms, one on the left and one on the right. I was picking up on something while looking into the darkness of the hallway, unsure of what it was; I opted for my original choice of door number one.

As I came back downstairs I told the girls I was going to start setting up the vid-cam. Michelle immediately asked if I was picking up on something. Both Dee and I simultaneously said the upstairs hallway. I explained how I felt when I was upstairs looking down the hallway, not really frightened, but more like there was something there. Dee explained a similar feeling.

After setting up the camera and snapping some pictures, we settled down with some coffee and talked about the different activities that have gone on there. Michelle had said the most recent incident was a plant freezing on the inside of her house, although the other indoor plants (or the ones outside for that matter) were not affected. Other incidences included the sighting of an apparition of a woman seen on two different occasions and by two different families, cold spots, power going off and on, and visible moving shadows.

Dee comforted Michelle as she seemed a little frightened by all the odd going-on's. After we talked a little longer, I thought of checking on the camera to see if the battery was still going. Just as I approached the top of the stairs, the camera shut off.... talk about timing! I went back downstairs to get my 35 mm camera just in case. After I snapped up a few pictures, I changed my battery pack.

We chatted several more hours before we all went to bed.

Dee and I slept downstairs and Michelle retired to her room upstairs. During the night I began to feel unusually cold, to the point where my teeth were chattering. I remember either dreaming someone was covering me up or was in reality covering me up. I remember a light beige wool blanket being laid over the knitted Afghan I had on already. I did feel much warmer after that.

The next morning, Michelle had to leave early for work. Before she left though, she said she has had the best sleep she has had in a long time.

So we said our goodbyes and promised to lock up after our coffee. Dee and I talked for a while about how we slept through the night. I told her I was quite cold but felt like I was being covered up through the night, the only thing was, I did not wake up with an extra blanket. Dee told me she that when she falls asleep, she does so with the covers over her head. Usually through the night she says they end up on the floor because she is so hot. Last night was no exception for her in feeling warm but for some reason she was also covered up sometime through the night, only she thought it was I who had done so, which was not the case.

The following additional notes were compiled by Dee Freedman:

- arrived late (close to 8pm) after a very harrowing drive

- had to run up stairs to bathroom and immediately noticed heaviness and presence to my left (later turned out to be a hallway with 2 bedrooms and a porch.

- toured house, noticed residual presence of a man in the dining room. Dining room was cold, but my guess is that the living room has no basement and is poorly insulated, was not a 'paranormal cold'

- the house felt comfortable in that there was no maliciousness anywhere, felt like a protective entity

- I noticed the woman in the upstairs hall, when I returned there, Krys set up cam

- very relaxed atmosphere with our hostess

- went to bed rather late, Krys and I both slept in the living room downstairs; during the night I specifically remember dreaming about being chased but I was aware in my dream that Krys was in the room and tried to yell but couldn't; I did manage to whimper; at that time I was covered with the blanket which I had kicked off and my arm/shoulder was patted and I heard "it's all right", and I went back to sleep.

- sometime in the wee hours I was awakened by a very low drowning and what felt like a vibration throughout the couch I was on; stopped and started several times for the next 20 mins or so;

- compared notes with Krys in the morning to discover it was not she that covered me up and that she had thought that I had covered her up during the night.

- one positive photo attached out of 18 photos taken with a Afga ephoto CL18 digital camera; physically saw an orb when taking the photo in upper hallway.

While P.R.O does not endorse the theory that ‘orbs’ constitute proof of ‘spirit energies’ etc and that the vast majority of such photos have natural explanations we include the following taken by Dee Freedman for the reason that she has stated that she saw it visually before snapping the pic (very rare indeed) and for your interest only. Orb indicated by arrow. 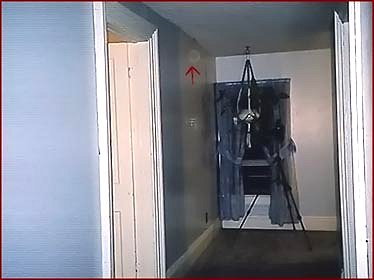 Did the ghost of “Maggie” (named by the current owner) tuck the investigators in? Of course anyone’s guess is as good as another’s. Some of the occurrences have provided easy, possible natural explanations, others have not.

We shall keep in touch with Michelle and monitor her situation. Any updates will be posted to this website.

*Please note that the name Michelle is an alias used in order to protect the identity of the current owner and that full permission was granted to publish her experiences and the above photo.