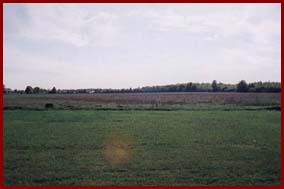 We first visited Chippawa Battlefield located in the Niagara region of Ontario in March 2001.  More than one of our members including members of the TGHRS and Ashley, “The White Witch Of Niagara” remarked on the affect that visiting this historic site had, had on us. Rich in history (War of 1812) and basically unspoiled at that time; the battlefield held a mystique or 'energy' if you will for each of us. Surely, this would be an excellent location to conduct an intense investigation!

For an in-depth look at the history of the battle of Chippawa we recommend the following book kindly lent to us by a  colleague. Red Coats & Grey Jackets - The Battle Of Chippawa by: Donald E. Graves.
We returned  to Chippawa on May 5th 2001 with the two-fold purpose of observation, and the  gathering of possible photographic and videotaped anomalies. A team of 6  proceeded to fan out in twos over the large brush filled field. It was one of  these teams who discovered that the far western portion of the site was indeed being converted into a golf course. A bit of a let-down for myself and some of the others present I'm sure.

The rest of the evening remained uneventful  with the exception of a quick visit by area police who allowed us to continue  with our vigil once assured as to whom we were and our purpose for being  there.

On December 8th, 2001 P.R.O members including myself returned to Chippawa as part of an impromptu whirlwind tour of 11 reportedly haunted sites in the Hamilton-Stoney Creek and Niagara area. We did not enter the field itself as the brush is wildly overgrown in the centre area. However, we were able to view the  newly created memorial area. Again nothing out of the norm, with the exception of that overwhelming 'feeling' of 'something' is there, but perhaps just out of reach.... This has held true for me, during all three visits. The atmosphere  created by being out in darkened field combined with the knowledge of the history behind the large loss of life and obvious intense suffering at this  locale could potentially play a role in stirring these 'feelings'. However, I must note that I have been under similar circumstances numerous times without  the same result. Our first visit occurred during broad daylight and I had limited information concerning the particular history also. Yet, this 'feeling'  persists, and I will add was a main reason as to why this spot was a highlight  of our recent trip.

P.R.O has no reports of ghost activity in regards to Chippawa. The Toronto Ghosts & Hauntings Research Society has some that are suggestive of a haunting.

Normally, I would not consider putting together a report such as this, (where there is really nothing out of the  ordinary to report) but for that 'feeling'. Certainly we or our colleagues at  TGHRS would appreciate hearing from anyone who has had an experience in this location. I also plan to re-visit in the near future and hopefully conduct another investigation, which may or may not yield some results.

Haunted or no, and I do highly suspect the former; Chippawa Battlefield is it is worth the visit if only for it's historical value alone.

Any future updates will be posted to this page...stay tuned.....