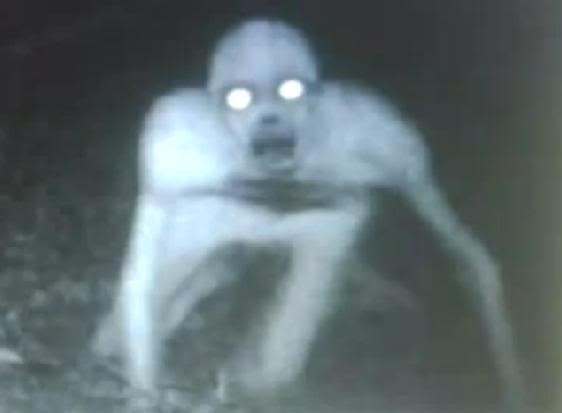 Well you asked for it. When I say Alien I don’t mean extraterrestrial. I don’t know what it was. It was just strange.

I was out one night, on my bicycle, taking the dog for a run. We lived at the end of a road, south of the village. I had just come to the last corner before the short stretch home, when the dog, a large black lab, took off ahead of me growling and barking. He headed for the opening to a cottage driveway. I could then see what he was after.

At first I thought it was a big white cat but then it appeared just like a white shape.

I got off my bike to stop the dog from attacking it. While I was shouting at the dog it moved towards a bunch of cedar trees and then stopped. I thought this was strange. If it was a cat why did it not go up the tree? Now this dog was pretty fearless and stubborn. Just as he was about to pounce on it,  “IT” stood up.  “IT” was about three feet tall, with long willowy arms and a large head. My first thought “IT” was a big white monkey. Then came a sound that I have a hard time describing. It was like a very loud sub-sonic grunt or blast. I don’t think the sound came from “IT”, I felt surrounded by the sound. I could feel it over my entire body. The dog stopped in its tracks, turned, and ran behind me with its tail between its legs. I was so scared; I could not get on my bike. I ran down the road with the dog, pushing the bicycle ahead of me. When I got home, my parents had guests over, so I went to bed. They came into my room to ask me if I was all right. I said yes and tried to go to sleep. I did not tell my parents what had happened till the next day. They said they could tell that something was wrong and with the look on my face that I was not lying. This happened twenty-five years ago but I remember “IT” like it was yesterday