We received the following report in late summer 2006. I normally will not publish cemetery reports as we do not wish to encourage vandalism or would-be ghost hunters hanging around with Ouija boards. However this report bears striking resemblance to an earlier one I received in 2005 at a different location over 100 kms to the south. At the time this was received the earlier report remained in our private files unpublished. Both cases involve more than one witness. Please do not write for directions or ask the name of this cemetery for the above stated reasons. We thank you in advance for your understanding.

"My friend and I brought another friend along, and we went to a cemetery last night. As I'm new in town, I have yet to find the name of it. (please be aware that we do know the exact location, but will not reveal it publicly).

We parked on the far side to the left, just after a bend in the road, and started walking towards the other side, following the gravel road. My friend, and I both stopped dead in our tracks. There was something in the trees, about 40 yards in front of us. It moved from one tree, to another, about 2 feet from the ground as quickly as we could blink. It was at one tree, then it wasn't. We stood there watching it, finishing each others sentences "First tree.... to the left, yes, about two feet high.. but not touching the ground. it's....staring right at us!"

We did this for about 2 minutes, as it moved between four trees. Then I felt like I was going to be sick, I turned to my friend to tell her we should leave, but again, as though having read my thoughts, she grabbed my arm and said let's leave, NOW! We ran back to the car. Our other friend was wondering what we were talking about, but he was spooked because we were.

The drive from the cemetery, was a quiet one. My friend and I tried to figure out what we had just seen. After a cigarette (or three), I felt as though I was being drawn back, so I turned to her and before saying anything, she said 'I'm so XXXXX spooked, but it's like something's drawing me back'." Our quiet friend in the back seat was getting antsy, he did not want to go back there. We should have listened to him.

We promised him we wouldn't get out of the car, we promised that our windows would be shut and doors would be locked, but he simply HAD to come with us. He slowly agreed. We drove back, and parked right in front of the trees (on the road, of course). I shut the car off and we watched and waited. It started again. My friend and I were finishing each others sentences as to where it was.

Again, it seemed to be confined to the trees, not venturing closer. After a couple minutes of it bouncing from tree to tree, our friend in the back seat hugged the headrest of the front seat and said "This isn't funny. I'm really scared now."

As soon as he said that, the thing moved away from the trees and appeared less than 10 feet away from us beside a tombstone. I was already trying to start the engine, as my friend said "oh my god, go GO GO."

I didn't want to disturb anything, so I drove slowly. It felt as though it took us hours to leave the cemetery, when in reality it was less than a minute. I felt numb, and I had a pounding headache. My friend, on the other hand, was trying not to be sick. As soon as I passed through the gates though, she opened the door, and threw up. I was near tears. The feeling was just so intense. It was a mixture of anger, and terror mixed with pure evil.

I can't even describe what we saw. It was dark, and there were no defining features other than the eyes. Which was odd, because they were black as well. But you could tell it was staring at us. THROUGH us. The eyes were so piercing. It was only about 2 feet high, but seemed so powerful. I hate trying to compare it to something, because it's never that accurate.. But, if I had to, I would have to compare it to a gremlin, or.. something along those lines.

We said our goodnights, and I drove them home. When I finally crawled into bed, I had the most uncomfortable sleep I had ever had, and my dreams were fairly screwed up too. I was being chased through the cemetery by something I could only sense. It caught up to me, and pulled me into the darkness."

On our suggestion two of the witnesses returned the following day and looked for footprints or anything else out of the norm. They also sent us the following photos and commentary. Please note these photos contain no anomalies, but are added so that you can visualize the location they were in at the time of the sighting. They are vague enough to make possible identification very difficult. 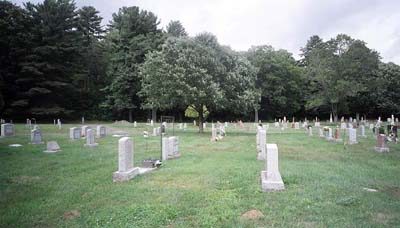 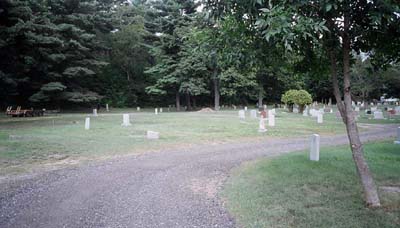 We rounded the bend and this is as far as we got. We stopped dead in our tracks and booted it back to the car. On the ground, there were our footprints from kicking up the gravel, as we stopped so abruptly. 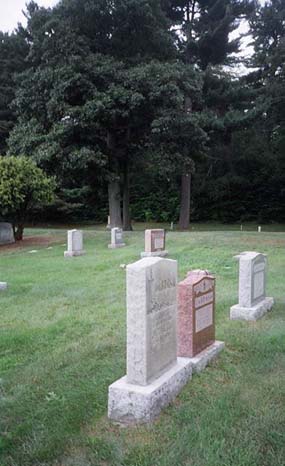 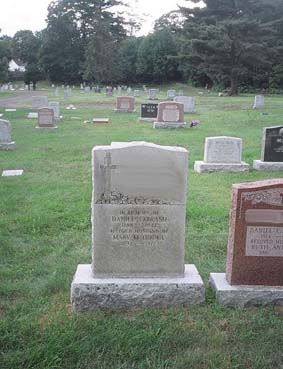 Above two photos:  This is the headstone it appeared behind. It’s when we got a really good look at it, and took off. 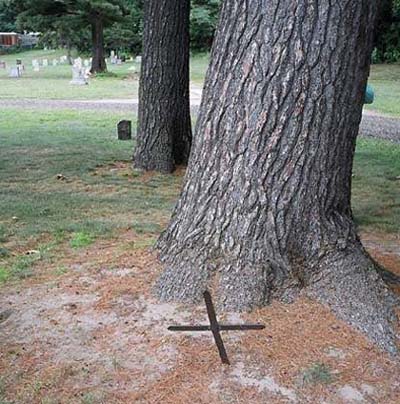 We could not find a marking for the iron cross that is beside the tree. 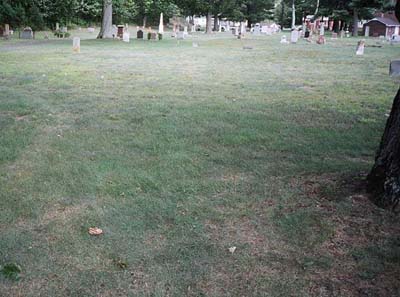 This picture kind of creeps me out. It was the first thing my friend and I noticed when we went up close to the trees. Again, it may be insignificant, but I jotted it down just in case. The grass looks trampled, as though someone was scuffling their feet along it. The paths go from one tree to the other. 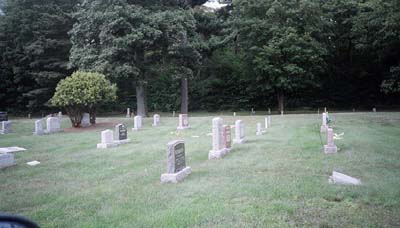 This is where we stopped when we headed in later that night. It was always in between the four trees (the taller trees, not the shrub)

Our thanks to the witnesses for sharing this report and these photos with our readers.