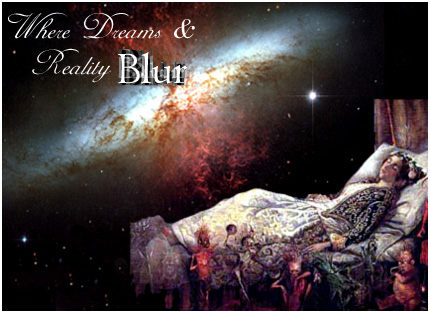 Last night I awoke to a very unsettling vision at around midnight. There was a woman standing beside my bed motioning at me in a threatening manner with a rather large baguette! Her lips were moving as if she were yelling, but no sound came from them.

As I watched this absurd scene with a strange, angry woman playing out my main telephone began to ring from the living-room. Since I have elderly parents who live on their own I immediately jumped out of bed to get the call. I worry about my parents, and dread late night phone calls.

Getting back to it, during my dash towards the phone I thought about the crazy vision, and reckoned I must have been having a very vivid dream. As I reached the phone it stopped ringing. I checked the call display, and the number was not known to me. I figured someone had dialed incorrectly, and if there was a problem either a message would be left or the caller would try back.

Returning back to bed, and at this point feeling as if I were awake I saw the lady this time in my hallway...she was still yelling without sound....as she tossed the French stick at me.....and vanished!

I made my way back to our bedroom where my partner at the time mumbled something about who had called....I told him not to worry it was probably a wrong number, and almost immediately fell back asleep with the thought "what a silly dream".....a lady threatening me with a stick of bread.

Well this morning I had immediate recall of this rather odd dream, and decided the whole thing must have been the result of too much onions, and sauerkraut on my chicken cutlet during the previous day's dinner. I grabbed my cup of coffee, and sat at my desk where the phone, and call display are placed. I had a look at the call list, and sure enough that late night call was logged with the same number that I had seen when I jumped out of bed to check it.

At least part of what happened last night was based in conscious reality......

Some parapsychologists would describe this type of an experience as an altered state of consciousness where psi effects are more likely to occur.

Comments on this article can be sent directly to This email address is being protected from spambots. You need JavaScript enabled to view it.