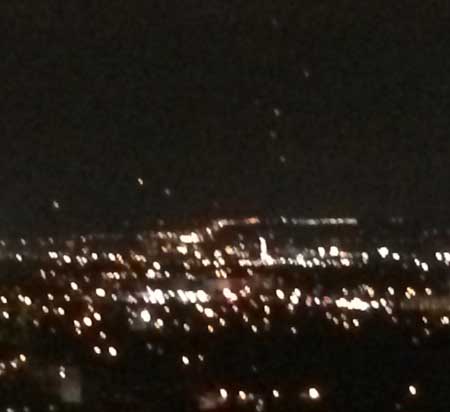 The above image was kindly shared with us by the witness

The witness writes in:

"So this all started happening at the beginning of this month in August.  While walking the dog around roughly 8:00pm, I've been noticing yellow-orange like orbs of lights flying in the sky in the Stoney Creek area.

The lights would at times fly in pairs and are always silent.  I would describe them as headlights from a plane but they don't move or act like a plane.  In particular on August 22, 2015 while walking the dog I saw the strange lights once again.  Literally, as soon as the lights grabbed my attention as something else other than planes in the sky, the lights would appear to be still/ not moving then slowly fade until it eventually disappeared .  (It's like it was reading my mind and one step ahead of me...when I clued into it, it distance itself).  When the two lights reappeared out of nowhere I was than certain that this was something else.  When I reached the park next to St. Clare School, I approached a group of teenagers - to which we were all observing the lights together.

This is where things get out of hand.  I quickly walk back home and drop the dog off and got into my vehicle and headed up the escarpment  to get a broader view of the Stoney Creek and Hamilton skyline and to see if I can catch the lights and where they were heading.  It didn't take me long to find the lights as they appeared right before my eyes in a cluster in the NW direction of Stoney Creek and Hamilton skyline.  At my first initial sighting upon heading up the escarpment there were about 20-30 orbs of lights at eye level just sitting in the sky as I would describe as frozen fireflies.  What happened next was straight out of the movie Close Encounter Of The Third Kind.  The lights were making all sorts of shapes and patterns.  At times they would disappear then all of a sudden reappear.  At one point all the lights disappeared except for 3 orbs that formed into a triangle, then in a blink of an eye the lights would then form into what looked like the dna structure.  One formation pattern I will never forget was of three sets of vertical lines (dotted orbs of light running up and down and interconnected from top left to bottom right) glowed so bright but was actually easy on the eyes (if that makes sense) looked to be directed right at me and even gave me a sensation.  This also naturally gave me the chills so I went to sit back in the car.  I would at times go in and out of the car due to excitement and anxiety.  Shortly after three addition orbs of lights lifted off in perfect synchronized formation off in the horizon from Hamilton Harbour in the industrial zone (Stelco/Dofasco) to join the other cluster of lights.  This was all happening for about a half an hour when I was up on the escarpment and shortly ended just after 10:00pm.

If this all didn't sound extremely silly to begin with, a couple of days before the event I had a feeling inside of me that I would be witnessing something extraordinary.  As if I was being prepared for it.

Anyhow, after reading on the internet about the recurring sightings in Hamilton and other peoples accounts just in the past two months, I feel that something needs to be done.  I understand there is only little we can do and I'm not sure to what extent this can be researched but I just wanted to somehow help in resolving the matter. "