UFO Details Report: "My wife and I were on the way home from xmas service when we decided to drive down a couple of streets to look at some xmas lights on the houses. As we turned west on one street I just happened to look up and saw three light in a flattened triangular formation. I'm an amateur astronomer and I'm very familiar with the night sky and what is normal. The fact that these light held in tight formation and there were no obvious navigation/anti collision lights visible like a plane would have caused me to stop and get out of the car. I walked a short distance towards them when I heard a local neighbour outside and he was looking at them too. As we watched the triangular formation we then saw another individual orange light coming up from the south apparently following the triangular formation. Four more appeared individually and headed north. The triangular formation and the other five all travelled from approximately south to north over a period of approximately 10-15 minutes. My wife captured several short video segments on her cell phone that clearly show several of the lights as they proceed north. Like I said I'm an amateur astronomer and I've been waiting my whole life to see something that I couldn't explain away by it either being aircraft, weather phenomenon, etc."

Update the witness adds: "First of all when the individual lights began to appear from the south and move towards us, for the first few seconds after seeing them, they appeared to be travelling at a fairly high rate of speed. Based on the speed of the several thousand jet airliners I've watched traverse the sky over the years during the day and at night (I'm a aircraft watcher too) I'd estimate they were travelling initially at approximately 200-400 m.p.h. at an approximate altitude of perhaps 1-2000' (I know that it can be very difficult to accurately determine the altitude of an object without other sighting information from different locations but that's my estimate). Then as they got closer they seemed to slow down to a speed that approximated the lights that were in a triangular formation. I don't know if that apparent change in speed was due to our angle to them/our perspective but that's what they APPEARED to do. They then continued to follow it ("triangle") in an approximately north-northwest direction.

Also when the individual lights appeared there was NO trail of any kind/color behind them. They just appeared and then brightened quickly for a few seconds and then settled down in brightness to approximately that of the lights in the "triangle".

I/we could not discern anything that would indicate that the "triangular lights" were attached to  a solid object. It was at too high an elevation/angle in the sky (I estimated it at approximately 15-20 degrees) to visually line up any known light source/object behind it to see if it (triangle of lights) blocked it out.

Finally my sister told me of a sighting her, my brother-in-law, and a couple of neighbours had back in September. They live in the very south end of Ajax almost at the lake. One evening at about 9pm she was coming upstairs and as she entered her bedroom she looked out the window (which faces south towards the lake) and she immediately saw a triangular shaped formation of ruddy-orange lights moving slowly in unison. She called out to my brother-in-law (who was in the basement at the time) to come outside with her. On her way she had the presence of mind to grab her camera. When they got outside she said they looked up and couldn't believe what they were seeing. Right at that moment their next door neighbor pulled into the driveway, got out of her car and asked her what they were looking at. When hey pointed it out to her she went and got her husband to see it as well. Then the individual lights began to appear just like in our sighting. They said they estimate the number of individual orange lights at approximately 15-20..she said they lost count there were so many. She managed to get a couple of pictures of the lights (which I looked at yesterday) and you can plainly see multiple lights. If you'd like I can get her to contact you or vice-versa if you'd like to speak with/email her.

Hope this additional information helps out."

My husband was out on the deck around 8:30 when he saw 2 bright orange objects flying overhead coming from the South east, then he called me out to view them and they kept coming in pairs sometimes singly all following the same line heading north west. They made no noise and the night was clear and they were unmistakable. We have never seen anything like this before 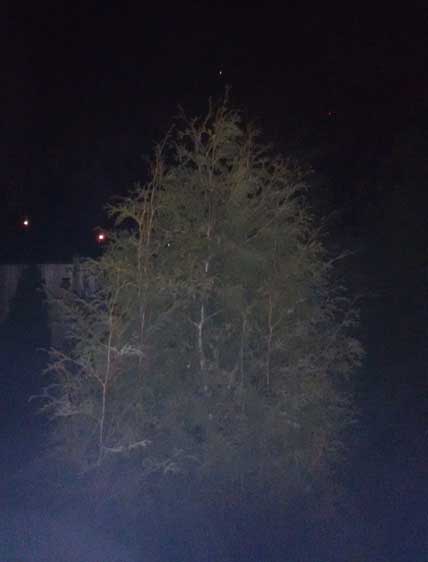 It is impossible to state what these lights may be and the photo is added as FYI only. Our thanks to the witness for sharing it along with a handful of others.

The witness writes: "Hi there not to sure what I just saw but I was outside on my front porch when I happened to notice a orangey red ball coming from north west and heading south east over my house in whitby ontario at approx 9:15pm on Dec 26th 2014 I saw a few more kind of appearing one after another I have never seen anything like it I grabbed my phone and took a video( not the best quality) but can still make out what I saw by that time probably about 4 had gone by already.
Sent from my iPhone


I did a bit of research online for possible meteor showers and anything else going on in night sky and couldn't find anything but I did find a YouTube video almost identical as to what I saw it was taken dec 24th 2010. Please let me know if you are aware of anything that it could be all the best and thank u."


Link to video will open in another window

Another witness writes in: "I also live in Whitby and I too saw this just after 9 pm on Dec 26th. I saw at least 10 of these objects, no sound and heading east. Glad I wasn't the only one - very strange for sure."

One more witness contacted us and had this to say:

"I was with my cousins driving back to their place (December 26th 2014 9:30pm) and we all saw these orange dots in the sky but they weren't moving. Just there and it was above houses so it couldn't have been construction lights or anything. There was about 7 or 8 orange lights. Immediately I thought ufo because what else could it be. And later that night around 12pm it wasn't there. "

Our thanks goes out to the witnesses for sharing their experience with us. If you have seen something similar at this date/time/location, can add further information to this report, or have experienced something that you believe may be a UFO in the province of Ontario, Canada please contact us at This email address is being protected from spambots. You need JavaScript enabled to view it. or fill out our reporting form here: http://psican.org/alpha/uforeporting.htm Your privacy will be protected and confidentiality is assured.