UFO details report: October 11th between 7:00 and 7:30 p.m. I went out for a walk and immediately saw a bright red light in the sky, moving steadily across.  As I watched, three more followed it, moving in close formation and at the same speed.  They appeared to have a round top section with something hanging below this, making them appear to be oblong in shape.  The first one then faded from view.  When the three following reached the same spot, they faded as well, as two more began to follow the same route, again in close formation and moving at what appeared to be exactly the same speed.  These were definitely not airplanes or stars.  I wonder if they could have been hot air balloons, but that doesn't explain the red light or how they could move at exactly the same speed while in close formation.  I took photos with my cell phone.

Here are some of the images taken and kindly shared by the witness.They are low res. and the objects in question are faintly see inn the distance. Shared here FYI only. 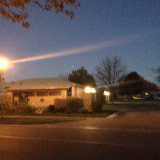 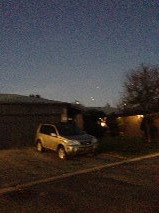 In further correspondence the witness writes:

"They almost looked like helium balloons with something hanging from them.  For some reason, the shape of them seemed to change in the other photos.  My son-in-law suggested they might be fighter jets in the other photos, but when he saw the first one he said definitely not. I am disappointed that the colour did not show.  They were bright red, which is another reason that I thought them quite unusual. There was one ahead of the others.  The second was a group of three. All appeared to move at exactly the same speed and maintained a constant and consistent distance from each other."