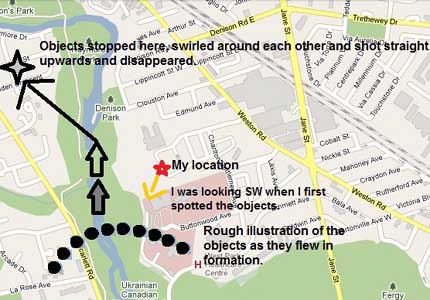 "At around 9:30pm EDT on May 7, 2011 I left my apartment building to go outside with my dog for his nightly run. It was a wonderful night weather wise. The sky was perfectly clear and the weather was mild and calm with absolutely no wind. For whatever reason I happened to look in a southwesterly direction towards the sky. As I did this something caught my eye. I noticed what appeared to be  a large object moving in the sky at an altitude of roughly 5,000ft (but could have been higher). I live near Pearson Airport so I just assumed at first it was another plane coming in for landing. But as I observed it more closely I quickly realized this was not the case.

The object appeared to be made up of individual spherical objects (really tough to say how many, but I would estimate at least 10) flying together in a perfect arc formation.  At this point I still tried to rationalize what I was seeing because up until this night I wasn't really into this sort of stuff so it really took me by surprise. I thought at first if it's not a plane then maybe it was merely a flock of birds. But as it crossed the sky closer to my location it became evident that there was no way this had anything to do with any type of birds.

I would estimate the total size of the objects all together was slightly smaller than a Boeing 737 aircraft. What struck me as really odd was that the objects had no apparent light source of their own emanating from them. They crossed the sky in a southwest to northwest direction at a relatively quick pace maintaining the arc formation without changing shape. However, it appeared to be moving slower than a traditional airplane coming in for a landing at Pearson Airport.

There were absolutely no sounds as they passed overhead. Since the wind was calm, I could hear any ambient noises very well as it was a still night.  As the night was extremely clear, the moonlight reflected off of the objects giving them a greyish/metallic appearance, but it was difficult to make out any specific physical details of the craft other than the shapes. The spheres just appeared to be very smooth, no windows or any other discernible physical features.  Again, they were not lit very well and were only reflecting enough light from the moon (which was just a crescent moon on this night) to provide a slight contrast from the night sky. I would say even a good broadcast quality camera would have had a hard time picking them up.

About 20 seconds after first spotting the objects crossing the sky they came to a complete stop a ways away from me but remained in the arc formation for a couple of seconds. They hovered in place for around 2 seconds. The objects then broke formation and began to what I can only describe as “swirl” around each other, taking on a more luminous white glow, but at no time were they ever brightly lit. They “swirled” around each other in an apparently random pattern for about maybe 3 seconds at the most and then shot straight upwards into the sky with incredible speed and disappeared. I can only compare the swirling movements to being almost like a cloud of black flies in the air swirling around each other.

Again, there was no sound from the objects at all, no flashes of light or anything--they were just simply gone. At this point I had a very sick feeling in my stomach because up until I saw this happen I thought I could rationalize this event. But after seeing them vanish like this I know that what I saw was definitely not terrestrial nor explainable via anything I have ever seen in my lifetime.

It was a fairly quick sighting, the total duration lasted around 30 seconds. I take my dog out nightly at this time and have never seen anything like this before. You have to know I am not the type of guy to just see something in the sky I don't recognize and label it a UFO or something unworldly. I always look for rational explanations. But in this case, I really do believe what I witnessed was anything but terrestrial."
Our thanks to the witness for sharing this report with us including the map. If you have seen these objects or something similar please contact us at This email address is being protected from spambots. You need JavaScript enabled to view it.. Your privacy will be protected and confidentiality is assured.
Update May 16th 2011 The following was posted to the NUFORC website. Please note date/time/location. We will attempt to verify this report with Toronto ATC.

This is not a personal sighting, but a report of a sighting between Toronto Centre ATC (133.300 Mhz AM) and an Air Transport Pilot (Jazz 951?) as heard by me on Airband radio, while driving north on Hwy 400 in Toronto.

Only the Pilots side of the transmision was heard. Missed the inital pilots report, but continued: Pilot: "I am a hunter and I can tell you they looked like group of ducks- but ducks flying at 25.1 ?" (25,100 feet AGL) "It was pretty fast, whatever it was !" "I know this will sound wierd, but I've seen jets flying out of Cold Lake(Alberta) and it did'nt look like that" Pilots signal goes out of range and no longer heard.

Nature of conversation in quotes is from my brief notes taken while driving and memory (8 minutes before writing this report). I have no doubt that the pilot's tone of voice was one of consern and wonder and he seemed very baffled about not being able to identifying a strange looking object formation that flew very quickly by him at slightly higher elevation. He announced he was at 24,000 feet just before I lost his signal. ATC could not identify it either, judging by pilot respones.

This should not be difficult to research/confirm with Toronto Centre ATC. (133.300 Sector) Mhz