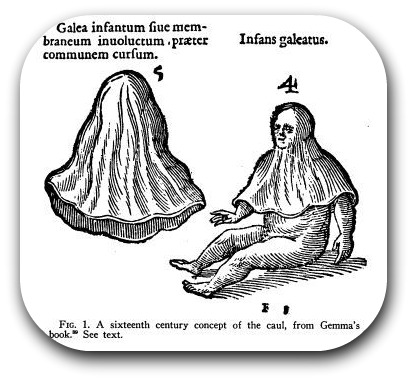 What Is A Caul and Its Role In Superstition And Folklore?

Ok guys let me first start by asking how many of you know what a Caul is?

If you answered yes to this question then I have to admit I must be falling behind and I should be hanging my head in shame as a folklorist, because when I was first asked to write this I had no Idea what it was. I know, I know, its shocking that WE don't know everything, but hey.. even we admit it does happen from time to time.

I decided to do the research and here are my results.... lets all learn together. First off what is a caul ? (Latin: Caput galeatum)

It is a thin membrane that is part of the amniotic sac. When the baby is born it is said to look like a shimmering veil that is still over the child's head. The person born with this caul is known as a caulbearer. According to European folklore a "caulbearer" is born with the gift. This gift would be considered to be a natural psychic ability. The caulbearers are known in the old ways to be good luck.

Part of the traditions with the caul was that it is to be removed from the baby and kept by the mother to be passed down to the child in later years or the caul was sold. Sailors were interested in the caul, because of the ability it was said to have to prevent the owner from drowning.

For the most part being born with a caul is looked upon as being good luck, however there are negative legends that go along with this as well, although not as well known or widely believed. The first legend of this sort I came across was this one that states

Another negative legend I came across was that;

*"Also if twins are both born with cauls it meant that they are marked by a demon and their souls are already damned."

Why these legends or myths get started may never be known, but they are passed down, and they are things that are known today as old wives tales.

Perhaps there is some truth to these stories or maybe they were made up to teach us lessons as we go through life ourselves to try and understand the questions that we may have, and cannot  find the answers to.

Even today things that are odd or different are looked upon with misunderstandings. We as humans react to these things in usually one of two ways. We either go looking for the reasons why they are not what we perceive to be normal, and most of the time settle for any reason we can be given or come up with that helps us to understand, or we shy away from it and pretend that we did not see it, hear it etc...

*1. " in several European countries a child being born with a caul was a sign that the child may become a vampire

*2. Also if twins are both born with cauls it meant that they are marked by a demon and their souls are already damned.

We were recently contacted by Shannon Lee Wolf who is one of the founders of Caul Bearers United - Lifting the Veil  launched 2010, which offers in-depth information and support for those who are caul bearers, and those seeking further information. Shannon is working towards busting some of the superstitions and misinformation associated with the caul. Please have a look at her website if you are interested in learning more on the subject.